There’s no way around gingerbreads during Christmas time. The smell of freshly baked spicy biscuits wafting through the house is enough to make anyone feel festive. I love baking my own gingerbreads and then decorating them with royal icing. It is a bit more work than my previous recipe, so I’ve divided it into three parts, so it’d be easier to follow. Even though it’s more work than the Xmas tree brownies (which were made from brownie mix so can’t get much simpler than that), I hope you’ll still enjoy making your own gingerbreads from scratch. My favourite part is always the decorating in the end and once again my Mr joined in with me and we had a lot of fun experimenting with different icing techniques.

What you’ll need (it makes quite a lot, so if you’re not that keen on gingerbreads or don’t have a big Christmas party coming up you can half the ingredients):

Step 1 – Pour the syrup, brown sugar and spices to a saucepan. Stirring frequently (so it won’t stick to the saucepan) heat until the ingredients have fully combined (melted) together and bubbling away. Then take it off the fire and stir in the orange zest. 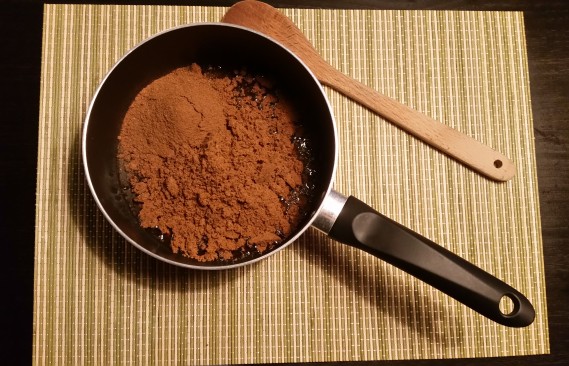 Step 2 – Let it cool a bit and then add the melted butter and eggs. It’ll look pretty disgusting and reluctant to mix together, but keep at it and eventually you should have a nice dark and spicy mix.

Step 3 – Add the sifted flour bit by bit. It’ll get increasingly harder to mix in, but in the end it should come off the saucepan with no effort. You can add more/less flour as needed. 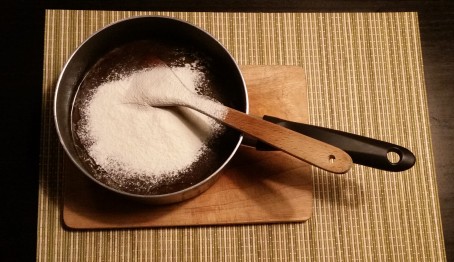 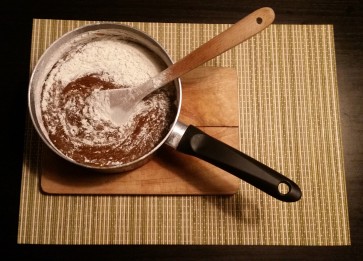 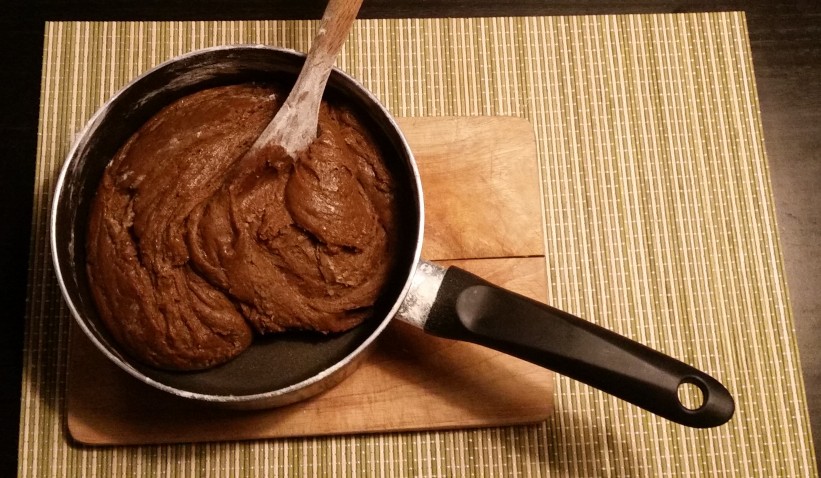 Step 4 – Split the dough and wrap in cling film. Put it in the fridge for at least a couple of hours, but best left there overnight. Mine look a bit like kidneys, but that’s ok. 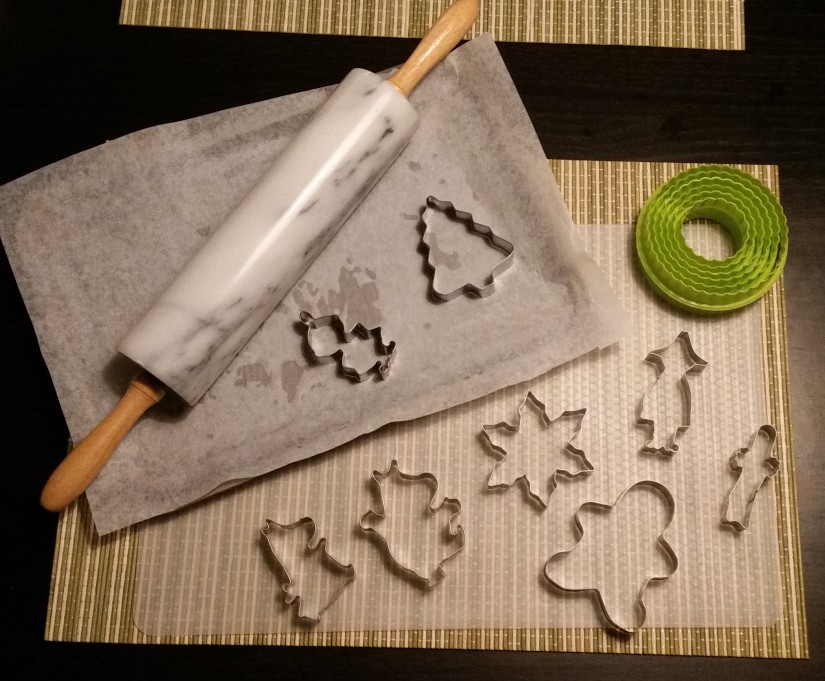 Step 1 – Once the dough has firmed up in the fridge, take it out, break a chunk off it (I prefer rolling it bit by bit, rather than the whole thing at once, as I wouldn’t have the counter space for it), sprinkle some flour on it for easier rolling and roll it out quite thin. It doesn’t even matter too much how thick or thin it is, as long as it’s as even as possible (so it’d bake evenly). Then use the cookie cutters to cut out the shapes from it. You might find that you have to wriggle the cutter around just a little as you’re doing this, to make sure you get a clean cut and your gingerbread will come away without any damage. You can also cut shapes out with a knife if you’re more creative.

Step 2 – Place the shapes on the baking tray covered with parchment. You don’t need to leave too much space between them as they’re not going to expand much. Stick them in the oven for 6-9 minutes, depending on your oven and the thickness of your gingerbreads.

Step 3 – It can be a bit tricky to know when they’re done as they don’t change colour like biscuits normally do. I like my gingerbreads quite soft so when the edges start to get a little darker, I know they’re done to my liking. Take them out of the oven to cool. Repeat the steps of part 2 until you’ve either used up all the dough or realised that if you bake any more you’ll have to throw a bake sale or a party. You’re going to have a lot of gingerbreads. 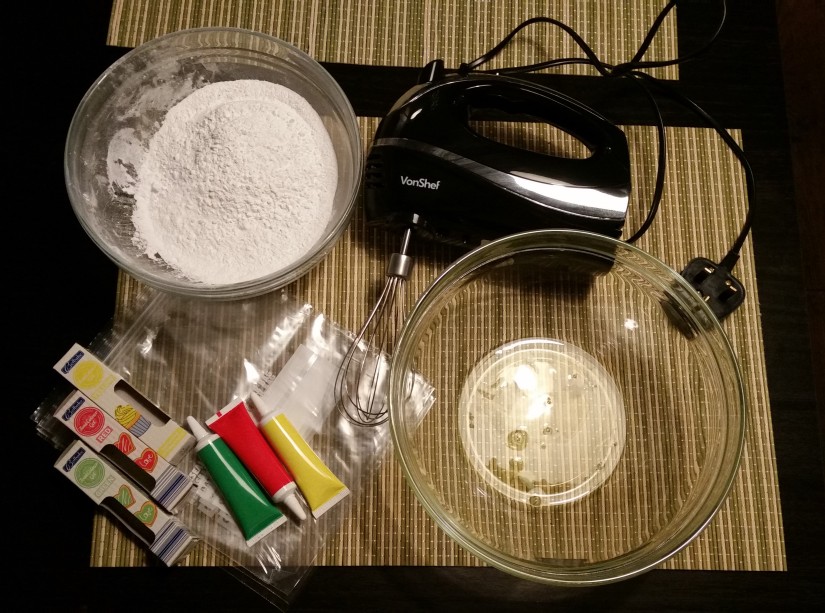 Step 1 – To make royal icing (it hardens when it dries so you can stack the gingerbreads without having to worry about losing any of the icing) whisk your egg whites until they’re frothy. Then start adding icing sugar about half a cup at a time. Now, I’m not going to lie, I had a big disagreement with the first batch of my icing and had to scrap it, which left me with a bit less icing sugar than I would’ve liked but hey, that’s baking for you. Full of exciting twists and surprises (well apparently it’s actually supposed to be all very measured and accurate but I just… I’ll make it work. Usually.) 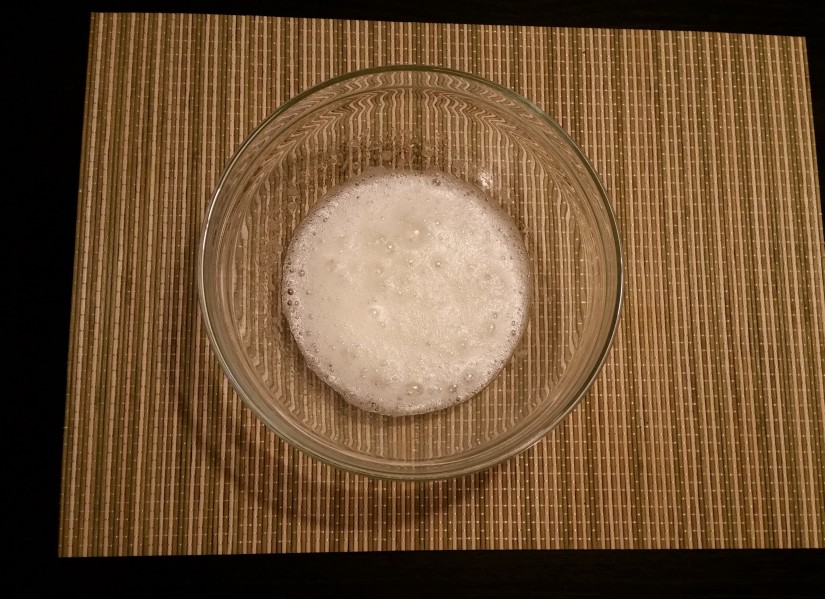 Step 2 – The above mentioned disagreement with the first batch of icing I tried to make is also the reason why I don’t have any pictures for this step, but I’ll do my best to describe it. Once you’ve added all the icing sugar followed by lemon juice/vanilla extract/etc and whisked it all about on high speed for a little bit and reached the desired consistency – it should be thick enough to hold but thin enough to pipe (or as in my case… you know, never mind. Everything that could’ve gone wrong with my first attempt, did go wrong) – spread it between different bowls for colouring. Or if you just want white icing, leave it as it is.

Step 3 – Spoon/pour the icing into plastic bags and then whilst pushing the icing to one corner of the bag as best as you can, tie a knot to the bag for as mess free work as possible. Then snip the tiniest little bit off the corner of the bag with scissors. You can always make the hole bigger, but it’d be quite a challenge to make it smaller.

Step 4 – Start decorating! I made a freestyle cut dragon which I then piped with green, yellow and white. Then my Mr joined me and we spent quite a long time just decorating away, creating some really cool patterns and colours. Let the icing set for a bit and enjoy! 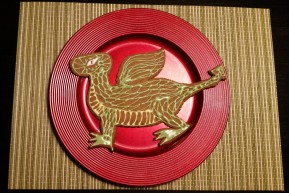 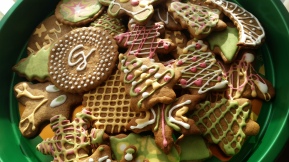 Here’s a summary of the steps:

Thank you very much for reading if you’ve reached this far. I’d love to know if you’re going to make your own gingerbreads this Christmas so don’t be shy leaving the results in the comments. Me and my Mr had lots of fun making these and we’ll probably be eating them for a while, with the amount we made.

© Gia Stark and giastark.co.uk, 2017-2020. Unauthorised use and/or duplication of this material without express and written permission from this site’s author and/or owner is strictly prohibited. Excerpts and links may be used, provided that full and clear credit is given to Gia Stark and giastark.co.uk with appropriate and specific direction to the original content.